“But what if we can’t find Jude?”
He leans closer. His breath is warm on my ear. “We will.”
“How can you be so sure?” I want to believe him so badly, but this is Rafa. The guy who’s all action and no plan. His smile is tired, knowing. An echo of a shared past I don’t remember.
“Because I’m not smart enough to give up, and you don’t know how to.”

Gaby Winters’ nightmares have stopped but she still can’t remember her old life. Still can’t quite believe she is one of the Rephaim—the wingless half-angels who can shift from place to place, country to country, in the blink of an eye. That she was once the Rephaim’s best fighter. That demons exist. That Rafa has stayed.

But most of all, she can’t quite believe that her twin brother, Jude, might be alive.

And Gaby can’t explain the hesitancy that sidetracks the search for him, infuriates Rafa, and sends them, again, into the darkest danger.

I received a copy of this book from LibraryThing on behalf of Text Publishing in exchange for an honest review.

This book is the second in the Rephaim series and this review will contain spoilers about the previous book.

Well, I don’t know exactly what to say about this book. I wasn’t that into it. Book apathy strikes again. I guess it is just normal second book curse, it’s full of weird filler and the actual plot doesn’t happen until the last 25%.

Haze starts about a week after Shadows ends. Rafa believes Jude is still alive and he wants to take a trip to Melbourne to try and find him. Gaby is desperate to find her brother but she holds off the trip like a bajillion times because she’s also scared. What if they find Jude and he doesn’t remember her or what if he hates her?

So there is lots of random stuff that happens to during this book before it actually gets to the point. Some bar brawls, meeting of the Outcasts that Jude and Rafa used to be part of, a random job the Outcasts do that has nothing to do with anything, a strange group of women that can trap Rephaim, demons.

And of course a lot of sexual tension between Rafa and Gabe.

The fighting was pretty awesome but felt unnecessary at points. Some new characters were introduced, including Mya, Rafa’s…ex? She’s pretty pissed that Gaby (actually she hates her) because she thinks everything that happened with Gaby and Jude disappearing is all Gaby’s fault. She’s a bit obnoxious and so, so eager to just be nasty and kick ass.

There is a ton of animosity between the Outcasts and the Rephaim and it shows, but there is still way too much that is unknown in their history and I would love some more answers. Especially the history between Rafa and Gaby. I need more!

It wasn’t a terrible book, I still enjoy the series, this book just is a standard middle series filler book. 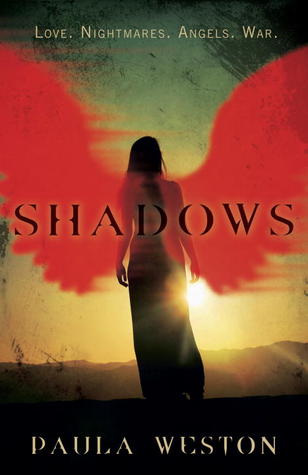 It’s almost a year since Gaby Winters watched her twin brother die. In the sunshine of a new town her body has healed, but her grief is raw and constant. It doesn’t help that every night in her dreams she fights and kills hell-beasts. And then Rafa comes to town. Not only does he look exactly like the guy who’s been appearing in Gaby’s dreams, he tells her things about her brother and her life that cannot be true, things that are dangerous. Who is Rafa? Who are the Rephaim? And who is Gaby? The truth lies in the shadows of her nightmares.

I requested this book at the insistence of a twitter friend; she assured me that I would love it, and you know what? She’s right.

Gaby has been existing, not really living, for the past year. She witnessed her twin brother dying in a very horrific car accident the year before. She barely made it out of the accident alive and lives every day with the guilt being the surviving twin and the grief of losing her brother.

Her memory of life before the accident is fuzzy and she has some pretty scary ass nightmares every night that center around fighting monsters and a sexy man she named Matt. Though she doesn’t ever talk about the accident, she has a wonderful and understanding friend in her roommate, Maggie. Her life in Pan Beach, Australia is laid back and exactly what she needs right now.

Gaby decides to enter a writing contest on a website with a thousand dollar prize and she uses her disturbing dreams as a plot for a story. Shortly after posting the story online, the man from her dreams appears in the bar she frequents. Only his name is not Matt, it’s Rafa and he claims to be her brother’s best friend. He also calls her Gabe and wonders how Gaby is still alive when he assumed she was dead like her brother.

She has no memory of this supposed best friend of her brothers but she feels like she knows him (I mean, she does dream about him every night) and he’s got the pictures to back up his story. So who is this super handsome stranger that talks to her like he knows her but calls her the wrong name?

After a random public make-out session with this Rafa person, and a sudden violent attack by people called the Rephaim that claim Gaby is lying about not remembering her life before the accident Gaby begins questioning who she really is. This is where Rafa should come in a explain things but the story comes out in bits and pieces (which actually kind of annoyed me. Gaby would get into trouble or do/say something and Rafa would be like “oh yea you need to know this blah blah blah”)

Someone (thing? Things?) has gone to great trouble to make Gaby forget that she used to be a badass.

This book is pretty much nonstop action, which I loved. I didn’t trust a damn person in this book; everyone seems to have their own agenda. Daniel, a leader of the Rephaim is just a dick, and not a fun cocky kind of a dick like Rafa. He’s just an a-hole.

I have a love/hate relationship with Rafa. He’s funny, good looking, and obviously cared a lot about Jude and Gabe. But he’s cocky as hell because he knows he’s funny and good looking and a damn good fighter and that annoyed me a bit. I don’t know, the good looking cocky guy just gets old sometimes, ya know? And his constant need to not reveal all the information to Gaby does get old.

However Gaby, I really liked her. She’s mouthy and strong and independent and though there is some strong sexual tension between her and Rafa, the center of her thoughts are her brother and keeping her friends safe.

The book was good. Interesting plot with a great main character and lots of action. And tons of questions yet to be answered!